#HeyDish: How Do I Mute or Leave Group Conversations in iOS 8

Among the features in the newest iOS update were many improvements to the messaging system. The app includes a number of functionality upgrades that enhance the most-used aspects of the older version, from greater iMessage compatibility to more control over how texts are displayed and responded to. While iMessage already had a well-featured group messaging system, it left something to be desired, and it was difficult to wade through the mass of notifications, especially when dealing with large groups. Thankfully, Apple heard the complaints and has made it easy for you to mute the notifications for a conversation or leave it altogether.

When you’re looking at a group text message, you’ll see that there’s a “details” option in the upper right corner of the screen, just below the menu bar. Tapping this option will bring up a new menu with a variety of options relating to the text conversation. 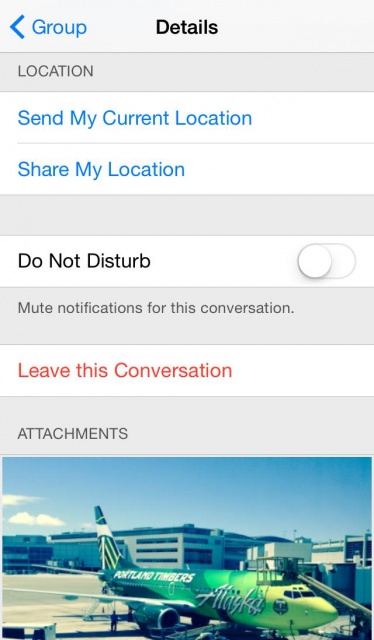 In the details screen, you’ll be given the option to interact with individual contacts, add new people to the conversation, and remove yourself from the group. You can also share your location with the other people in the group, if you’re all trying to find each other. By toggling the “Do Not Disturb” switch, you’ll still be able to read and respond to messages in the group like normal, but your phone won’t buzz every time anyone sends a message. If you decide you’re done talking to your friends entirely, you can tap the “Leave this conversation” button and you won’t see or be able to respond to any new messages within the group.

It’s important to note that these options may be different based on who is included in the group message. If there are Android or other non-iOS users in the message, it may not be a group conversation, but rather a text blast from a single user, so while you could respond to it and potentially reach everyone else in the group, you might not be able to leave the conversation without deleting the message.